The settlement showed that despite agreeing to the financial payouts, the church “has denied and continues to deny all material allegations of negligence and damages in this case.”

The evangelical megachurch, which recently saw its entire elders board resign over unrelated accusations that former lead pastor Bill Hybels sexually abused women, made the payments in the lawsuits over several years, court records obtained by The Chicago Tribune show.

One payment of $1.75 million was apparently made in February, while another one of $1.5 million was made last year.

Former Willow Creek volunteer Robert Sobczak Jr., now 24, pled guilty in 2014 of abusing an 8-year-old with special needs at the church, alongside an older boy not connected with the church. A year earlier, he admitted to sexually abusing another disabled boy at the church, believed to have been 9 years old.

Willow Creek said that the experience was “heartbreaking,” and insisted that it has made changes.

“We have worked with law enforcement and security experts to learn how this happened and how we can ensure it never happens again,” the church said, according to FOX 32.

Cook County prosecutors had described in the lawsuits that Sobczak separately took the two boys to an isolated area of the church, where he molested them.

What is more, the document shows that another church worker had raised concerns in January 2013 that Sobczak was “emotionally unhealthy.” The volunteer was allowed to remain with the program, however, and went on to abuse the second victim.

The second victim reportedly suffered “great mental and emotional harm” due to the abuse he suffered, and underwent therapy.

The settlement showed that despite agreeing to the financial payouts, the church “has denied and continues to deny all material allegations of negligence and damages in this case.”

When the child sex abuse charges first came to light back in 2013, the megachurch said in a statement:

“Willow Creek engages in a rigorous screening and training process for all volunteers and staff in our Special Friends Ministry that includes a detailed child protection application process, checking of references, a national background check, cross checking the sex offender registry, and offering training in child protection. Mr. Sobczak had completed and passed this screening process before he began serving with the Special Friends Ministry.”

Heather Larson, who would go on to become Willow Creek’s executive pastor, before resigning this August over the Hybels scandal, insisted back then that church leadership is “very concerned for the child as well as the family.”

“We take rigorous steps to protect our children,” she stated at the time.

Larson, along with Willow Creek’s entire elder board, resigned earlier in August, admitting that they should have believed the multiple women who accused Hybels of sexual misconduct and abuse this year.

The church initially sided with Hybels, who has continued to maintain his innocence in the face of all claims. It later admitted that its founder had “fallen into sin.”

“While Bill Hybels was our founder and pastor, he was human, broken, and self-admittedly sinful. We believe that his sins were beyond what he previously admitted on stage, and certainly we believe that his actions with these women were sinful. We believe he did not receive feedback as well as he gave it, and he resisted the accountability structures we all need,” said in a statement about the issue Missy Rasmussen, one of Willow Creek’s elders.

Social media has it that  gospel singer James Hall sued Bishop Jeffery Thomas over the Bishop claiming that the two were in a romantic relationship, which ended in the judge throwing out the case! Bishop Thomas is stating that the two men were lovers and that is the reason why he relocated from North Carolina to live with Hall in New York.

Hall unequivocally denies the claims stating that he was only helping the Bishop recover from an unnamed sickness.

Mr. Thomas has never expressed any purpose to his actions other than some imagined relationship he believes he has with me, and is nothing more than a disgruntled fan. – (James Hall)

If Bishop Thomas was only a fan, the question is has Mr. Hall ever allowed another fan to live with him? Stories have the two meeting at a church event in 2015. It was not too long after that Bishop gave up his ministry to be with Hall. Well, we do not want to insinuate anything but it sounds extremely suspicious, to say the least. However, the gospel singer is adamantly denying any type of romantic involvement.

It is no secret that the gospel music industry has more than their fair share of homosexuals and bisexuals. Although for a myriad of reasons, there are many who hide their sexual orientation but there are just as many who are open.

There are pictures in circulation on the internet with the two men being a little more affectionate than two heterosexual men would be with each other. There is a picture with the Bishop shirtless together with Mr. Hall in a onesie on a bed. There is another picture with the two having lips really close together puckering up to one another. That one picture reveals that there is something else more going on between the two than a platonic relationship.

However, for some reason, this whole scandal began when the Bishop started to post pictures of him and Hall together. He also alleges that Hall is romantically involved with another man, Pastor Kevin Bond, a former member of New Birth Missionary Baptist Church (Atlanta, Georgia) under Bishop Eddie Long.

Bishop Thomas was threatening to release sex tapes but the court has placed a gag order. By the way, Hall is trying to get a whopping $15 million for damages.

More than 500 pastors and theologians have signed a ‘Reforming Catholic Confession’ designed to mark the 500th anniversary of the beginning of the Reformation on October 31, 2017.

Produced by a drafting committee composed almost entirely of US-based scholars, the Confession aims to highlight ‘the Reformers’s original vision for Catholic unity under canonical authority’. It says critics of the Reformation often ‘fixate’ on Protestant divisions. However, it says that ‘despite our genuine differences, there is a significant and substantial doctrinal consensus that unites us as “mere Protestants”.’

Martin Luther in the Circle of Reformers, 1625/1650© Deutsches Historisches Museum

Its sub-heading is: ‘What we, Protestants of diverse churches and theological traditions, say together’.

The Confession includes sections on the Trinity, Scripture, the atoning work of Christ, the Holy Spirit, the Church and baptism and the Lord’s Supper.

A section entitled ‘explanation’ stresses the Reformers’ original intentions and defends Protestantism from the charge of being inherently divisive. It says: ‘While we regret the divisions that have followed in its wake, we acknowledge the need for the sixteenth-century Reformation, even as we recognize the hopeful possibilities of the present twenty-first century moment.’ The Confession continues: ‘We therefore aim to celebrate the catholic impulse that lies at the heart of the earlier Reformation even as we hope and pray for ever greater displays of our substantial unity in years to come.’

The ‘explanation’ acknowledges Protestant divisions and says the Reformers ‘sometimes succumbed to the ever-present temptations of pride, prejudice, and impatience’. However, it denies divisions were the ‘inevitable consequences’ of the Reformation.

It says that rather than attempting to replace denominational credal formulations, ‘our statement aims at displaying an interdenominational unity in the essentials of the faith and agreement that the Word of God alone has final jurisdiction’. It urges further conversations and dialogue seeking to ‘achieve greater unity’.

Timothy George, dean of Beeson Divinity School in Birmingham, Alabama, who co-chaired the Confession’s steering committee, said that a significant motivating factor of the Confession’s participants is to call the Church to spiritual renewal.

He told the Christian Post: ‘It’s a call for the Church to be the Church in a world that is very much pushing against the things of God in so many different ways, and to believe that God will sustain in the midst of the storms that are all about us.’

George said: ‘I don’t think we can be faithful Christians in the tradition of the Reformation unless we take seriously Jesus’ words and his prayer [in John 17] that his disciples would be one so that the world might believe.’

He said the Confession was ‘a call to recognize that there is a brokenness about us and within us, which we have to pray that God, the Holy Spirit, will heal and mend in our midst. But we don’t think that relaxing into our divisions and accepting the status quo as divinely ordained is the way forward.’

The case has developed into a large-scale scandal in Nigeria with allegations of sexual abuse made against Ezeuko who made followers call him God or Jesus ‘all the time’.

A Nigerian pastor is on death row after dousing several church members in petrol and setting them ablaze.

One congregant died as a result and Emeka Ezeuko, known as Reverend King by his followers, was sentenced on Thursday to death by hanging.

He denied all six charges against him, saying his victims were burnt by an electrical generator exploding, according to local media reports. The case has developed into a large-scale scandal in Nigeria with allegations of sexual abuse made against Ezeuko who made followers call him God or Jesus ‘all the time’.

One witness said he had repeatedly abused her and was made to serve him meals naked. The same victim said she had had four abortions after Ezeuko impregnated her multiple times.

The court in Lagos heard Ezeuko had tortured his followers to force them into confessing to sex outside marriage before setting them alight as a punishment for their sin.

But one witness to the trial said the renegade pastor reacted defiantly to his sentencing.

‘I am not afraid to be hanged. After all Jesus Christ was hanged. That was how Jesus was hanged and the crowd was against him. It is a great honor for me to follow the footpath of the Lord Jesus Christ,’ he shouted to the courtroom.

“In a public place, especially in a church, we should be welcomed with open arms.”

A Georgia woman thought she found the perfect church. It was located in her neighborhood and would accommodate her service dog, Hook. Cynthia Coleman, 58, is legally blind, with no vision in right eye and only peripheral vision in the left.

However, Coleman was told to take Hook and sit in the back pew after they sat down in the front of the church during her first visit, WXIA-TV reports.

“Sitting down for about five or 10 minutes and about four or five deacons approached me in a way that made me feel very uncomfortable. Somewhat aggressive,” she told the outlet. 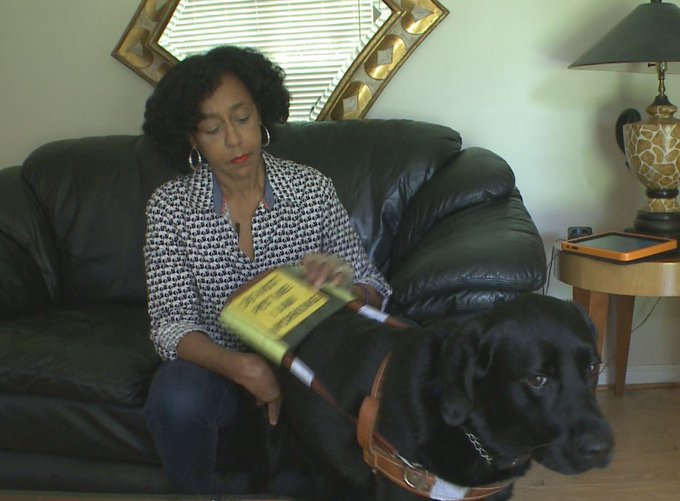 To no avail, Coleman explained that she could not see the pastor from the rear. But the deacons insisted that Coleman and Hook sit in the back over concerns that the dog would become agitated during the service.

Coleman believes the church acted inappropriately. She said the deacons could have admitted unfamiliarity with how to manage a service dog and asked her to explain “how this works.”