A Minnesota opportunist who calls himself a pastor sexually assaulted a 28-year-old woman after she became unconscious during two “anointing sessions”  and has now been charged with two counts of third-degree criminal sexual conduct that could land him in prison for 15 years and a fine of $30,000.

A criminal complaint against Meally Morris Freeman, the 55-year-old “pastor” of Grace Mountaineer Tabernacle Church in Brooklyn Center, Minnesota said the woman accusing him of criminal behavior saw him as a “spiritual father” when she went to him for spiritual guidance starting on Sept. 20, 2017, according to Fox 9.

In January, however, she told police that Freeman sexually assaulted her at the church which led to his arrest on Tuesday.

She explained that during an anointing session at the church, the pastor anointed her with oil and advised her that she was in need of “deliverance” that would require a one-on-one session with him.

Trusting the spiritual guidance, the woman said she attended a one-on-one session with Freeman and he gave her small cups of ‘oil’ to drink. Soon after they began to pray, the woman says she lost consciousness…

When she woke up, the woman explained that her underwear was wet and there was oil on her stomach and near her breasts. The pastor told her he had “anointed all places, but that he didn’t see all places,” and informed her she needed a second session that would take place after Bible study that night. The woman said in their second deliverance session she became unconscious again but when she woke up this time her pants and underwear were hanging ripped at her ankles and her shirt and bra were pulled up over her chest.

She said the pastor, who was spraying a water bottle filled with oil on her private areas, also inappropriately touched her genitals and anus.

It wasn’t until she shared what happened to a friend that the woman realized she was sexually assaulted.

The woman eventually confronted Freeman and recorded their conversation without him knowing. Freeman did not deny touching her genitals, but instead discussed the “deliverance process.” He admitted he anointed her breasts with oil and told her, “We insert things into people” and “you don’t ask what happens [during deliverance], you don’t go into details and that deliverance can be very tempting.”

The woman said at another meeting a church elder, Freeman and his wife [who should be arrested too] told her not to report the incident to police.

This disgusting so-called pastor Meally Freeman was arrested by Brooklyn Center Minnesota  police Tuesday around 4 p.m. and is in custody at Hennepin County Jail.

This is an absolute mockery of God and His Kingdom…. Psalms 118:8 says It is better to trust in the LORD than to put confidence in man; it’s funny how Christians seem to overlook that verse.  If you need “deliverance” from sexual sins make a decision to live above all evil and  JUST STOP DOING IT, then you’ll be delivered! James 4:7~ Submit yourselves therefore to God. Resist the devil, and he will flee from you. Many unfavorable “church” situations can be avoided if Christians would obey whats written in the bible instead of just reading it.
45.076076 -93.332728

BOSTON — Shaun O. Harrison Sr., a former Boston high school dean, anti-violence advocate and youth pastor nicknamed “Rev” by the students for his pastor-like influence was sentenced to up to 26 years in prison for shooting and nearly killing a student he had recruited to sell marijuana for him in 2015. While employed as a Dean, he boasted to students of his gang ties, drugs and guns. He recruited one of them, a 17-year-old student from a broken home, to deal marijuana in school, authorities said.

But after a dispute over slumping sales, Harrison shot the teen in the back of the head with a .380 pistol as they walked on a snowy city street in 2015 and left him for dead, prosecutors said, but Luis Rodriguez didn’t die. He dragged himself up and flagged down a passing car. In the hospital, Rodriguez uttered the name of his would-be killer: “Rev.” Harrison, now 58, was sentenced Friday (May 2018) to as many as 26 years in prison for assault and other charges, capping the sad tale of a wannabe saint who prosecutors say, was revealed to be a dangerous, predatory fraud.

“You professed to be a man of religion, you promote yourself as one who can mentor troubled youth … and yet you violated their safety by bringing drugs and violence to them,” Judge Christopher Muse said.

Harrison arrived at English High in Boston in January 2015, just two months before his arrest and after stints at other city public schools over about five years. He had been a community organizer and youth minister in Boston for decades, a familiar face who often worked with police and other law enforcement and helped gang members turn their lives around.

“This guy is probably the last person we would expect,” Police Commissioner William Evans told The Boston Globe following Harrison’s arrest in 2015. “He was an advocate for anti-violence. Why would he be on our radar screen?”

But there were warning signs early on that something was amiss.    A city inquiry into Harrison’s disciplinary record following his arrest found that he’d had other reprimands in his short tenure in the public school system, including warnings for pushing a female student and making inappropriate comments to two other students, both in 2012. The morning he shot Rodriguez in 2015, he had shoved a female student during a dispute. School officials said later they had intended to fire Harrison for that incident alone. But he was charged with attempted murder the next day instead.

Harrison has denied the allegations, telling WHDH-TV he “never lived a double life.”

“I am not a gang member. I’m the Rev,” he told the station. “For me to be accused of something like that, all of a sudden at 55. … It’s like a nightmare, and you are trying to wake up from this nightmare,” He said. His lawyer told the judge Harrison shouldn’t have to die in prison, describing him as a well-respected youth advocate with no prior criminal record. But the judge said Harrison acted like an “assassin” and called it a miracle Rodriguez’s name isn’t etched into a nearby homicide victims memorial.

“He did everything to engrave Luis’ name on one of those stones except get a death certificate,” Muse said.

Rodriguez, now 20, cried quietly in the back of the courtroom as his aunt described the horror of learning that her nephew was nearly killed by someone he trusted. The bullet entered near Rodriguez’s right ear and just missed his carotid artery, breaking his jawbone and causing nerve damage and hearing loss.

During Harrison’s two-week trial in May 2018, prosecutors painted a portrait of a man who took advantage of youths instead of molding and shaping their lives for the better.

Rodriguez testified that he had a rocky start with Harrison but soon came to confide in him about his personal struggles. His mother was incarcerated and his grandmother largely raised him.

“He was my counselor. I went to him for everything,” Rodriguez said in court, according to the Globe .

On the night he was shot, Rodriguez said the two were planning to meet at a gas station. Harrison had promised to bring drugs and take Rodriguez to a place where the two could meet women, prosecutors said.

A surveillance video shows the two blurry figures walking in the snowy city street. Then one suddenly turns and runs away.  Rodriguez sat in the back of the courtroom and cried quietly along with his family as his aunt took the stand to describe the pain of almost losing him.

“If (Harrison) has the opportunity, I believe from the bottom of my heart he would abuse his power and do this again,” Diana Rodriguez said. “May God forgive you sir because we will not,” she said.

Carroll urged the judge Friday for a sentence of about eight years to ensure Harrison doesn’t die in prison, noting he has no prior criminal record.

But the judge said Harrison’s conduct requires a stiff penalty, saying Harrison acted as an “assassin” and viewed Rodriguez’s life as “worthless.”

“He will be scarred emotionally and impaired physically for the rest of his life,” said Judge Christopher Muse, who sentenced Harrison to 23 to 26 years behind bars.

Rodriguez had told hospital staff he was shot by one of his marijuana customers during a botched drug deal, Carroll said.

Bruce Carroll, Harrison’s attorney, asked during the trial why Rodriguez did not immediately identify his client as the shooter even though he was conscious and alert. 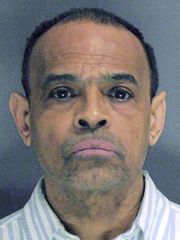 The Suffolk County District Attorney’s Office releases Shaun Harrison’s booking photo. Harrison, who had worked as a dean at Boston English High School for five years, was convicted of shooting and nearly killing a student in 2015 that he had recruited to sell marijuana for him. (Photo: AP Images)